Archive for the tag “ecology”

Bossa nova, guitar playing and Bahia were part of the same formative package and, as school drifted further from the radar, I discovered the Novos Baianos in IBEU’s Pandora’s Box. More than a band, they were a community of long-haired musicians from Bahia who, like the Greek poet-warriors, not only sang but also lived out the hippy dream.

Their philosophy could be synthesized in the question “Why not live this world if there is no other world?” which they asked in their good-humored samba, Besta é  Tu (It’s you who’s the fool). The song reflects the eagerness of their generation to enjoy life despite what was taking place in the political arena and to distance itself from the caretas, or the squares, and their caretice. They started out as a group of artists assembled in Salvador by Tom Zé, tropicália’s musical genius. When they came down to Rio in search of opportunities, their talent and their carefree ways ended up making them the queen bees of the carioca hippies, around whom everyone and everything cool gravitated. Luck opened several doors for them: career wise, they filled in a talent vacuum left behind by most of the country’s big names, such as Chico Buarque, Gilberto Gil and Caetano Veloso that the military had either exiled or completely censored. Music-wise, João Gilberto, the godfather of bossa nova, another bahiano, became very close to them and coached their raw talents into the highest musical standards. Meanwhile, their carioca bass player, Dadi, recruited through a newspaper advertisement, had no one less than Jorge Ben as a teacher.

In terms of their work, they did similar to what the Rolling Stones had done with the blues; they mixed rock and roll energy and authentic Brazilian themes. The result was very strong and, overall, their work reflected what all Brazilian hippies were during the military dictatorship: a force of nature. As expressing political thoughts was too dangerous, the confrontation with the system was existential, almost spiritual, therefore perhaps healthier than conventional politics as it did not involve picking up guns or resorting to violence. Instead this avenue sought resistance through being un-urban, in close contact with one’s true self, with nature, with music and with surfing in the case of Ipanema’s youth.

In fear of repression but, nevertheless, in complete disagreement with the route the country was taking, many thinking heads of that generation took shelter in a journey of self-discovery. By doing so, the Brazilian hippies dived into a strange, unique and lawless existence. Nonetheless, life went on, and around them was the intensity of Brazil; the mixture of cultures and the sensuousness of its streets still soaked in the euphoria of the 1970 World Cup triumph. Their psychedelic and counter-cultural outlook was akin to Jimi Hendrix meeting Pelé.

With so many cosmic forces behind their music, the Novos Baianos, the most visible and most colourful of the Brazilian hippies, found a record label that ended up providing them with a ranch in Jacarepaguá, in the outskirts of Rio. There they divided their time playing football, rehearsing, creating, eating vegetarian food, smoking weed and having children. The ranch would become an icon of that era.

If a big portion of the youth appeared to be messed up, the mainstream was even more. Under the military, Brazil had become a lost ship sailing into an economic disaster zone with a drunk and autocratic captain in command. Following a pattern that still remains around the world, while the economy was doing well, huge predatory international deals were sealed behind the scenes; Western power brokers came up with generous investments and told the military not to worry about paying back. The rampant corruption and the suppression of any form of opposition or transparency allowed a huge portion of that money to “evaporate”. However, when the banks would come back for repayment, the bill fell on the lap of people who had nothing to do with those transactions, and who had never benefited from them. 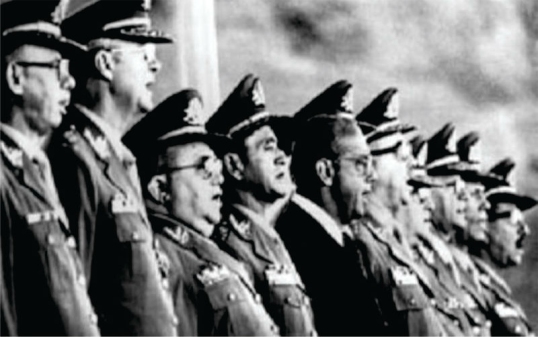 President Gen. Figueiredo and other Generals in the Seventies

One of the main victims of this orgy of easy money was the environment. Considered as a commercial resource, thousands of forest hectares and of animal species were set to disappear in order to allow huge farms with state-of-the-art technology to appear.  “Coincidentally”, most of the people who the big international banks funded to carry out these projects belonged to the backbone of the regime: the one percent of the population who owned eighty percent of the land. Brazil’s rulers needed this investment in order to silence the suggestion of appropriating unused land and handing it over to the destitute. The so called Reforma Agrária, the Agrarian Reform, still haunted the military despite their heavy hand. Long before the coup, this project had been a hot topic and blocking it had been one of the main reasons why the so-called revolution of 1964 had happened in the first place.

Regardless of this issue, most of the soil under the jungle was inappropriate for agriculture. Disregarding this simple but crucial limitation, the big farmers used the simplistic technique of burning down the woodland to clear their properties. After the flames had ceased, the earth on the new mega-farms became useless, and could only be used for pastures. This silent crime against the planet’s health continued way after the dictatorship ended and terminated a forest area larger than several European countries. This caused another problem: the forests’ eradication forced their populations into the big cities without any skills or preparation.  The saddest thing was that most of these investments never brought any benefit to the economy; a lot of the burnt land had to be abandoned as, much of the time, raising cattle made no economic sense in those remote regions.

Next to such a government, the demonized, longhaired, Cannabis smoking lefties were angels. The world could only blame those young hearts for not risking their lives to fight against that machinery. 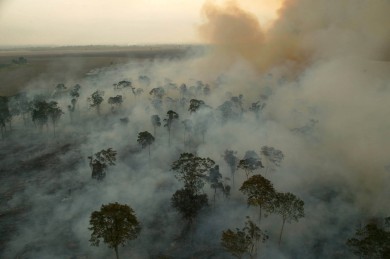 Burning down of a forest.

Ecology as a new form of Imperialism 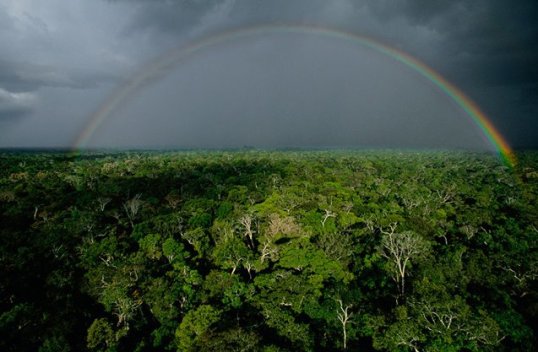 There is a disturbing pattern in the Anglo Saxon press when the subject is ecology, and in particular when they talk about Brazil’s role in it. Some present the country as a potential savior of the planet but most articles portray it as an irresponsible menace and seek to open the eyes of the world eyes to the “natural disaster” sponsored by its reckless governments.

There is no doubt that there are reasons to be alarmed; the Brazilian Amazonian forest has taken a great beating due to the irresponsibility of powerful lobbies who put their interests above the planet’s health. They are indeed active, aggressive and have a big say in Brazilian politics; this is worrying because what they get away with affects the rest of the world. The crux of the matter is that the world is worried because Brazil is the guardian a resource that is precious for the entire humanity.  There are other countries in similar positions: Saudi Arabia controls a huge percentage of the world’s petroleum, Russia detains gas that is essential for the functioning of Europe, Britain and the US host a banking system that the world depends on,  the United States detains most of the servers that enable the Internet to function, etc.. the examples could fill out this page.

However when we look at this problem from a different perspective: if Brazil detains this crucial, so to speak, ecological capital, the so called “First World” detains a disproportionate amount of the world’s wealth. No one needs to be a scholar in history to know that this advantage was obtained by extracting richness from the so called “Third World”, and that this was done with the use of its also disproportionate military power. Also, no one needs to be a scholar in economics to know that if the wealthier countries administered these resources more rationally this would tackle poverty which is the main threat for forests, not only in Brazil.

While we read plenty of articles questioning the ability of the Brazilian government to tackle the environmental issue, we have never heard of any Brazilian organization claiming that Americans and European are bad in managing money and suggest that they have the answer, and that they should perhaps step in for the good of human kind.

When one looks into the hard facts one sees that the worst time for forest devastation in Brazil was in the seventies, when the country was under a dictatorship and no one could protest against anything. The regime was sponsored guess by who? the United States of America and their allies who did not want Brazil to follow Cuba’s steps. As democracy returned and established itself the rhythm of the  forest devastation decreased, Brazil is now the biggest investors in the world in forest protection. Obviously a jungle with continental dimensions is difficult to control and there are problems, but not to the alarmist extent that one reads in many ecological articles about Brazil.

The Amazonian forest is still bigger than Europe, there are an estimated seventy tribes who have never had contact with white people, its rivers are still unpolluted despite their being a good deal of foreign factories next them beginning to throw waste into their waters. But a point that needs to be made here is that contrary to popular knowledge the forest actually tends to expand due to the excess of Carbon dioxide in the planet’s air.

Yet, some of eco-organizations suggest that Brazilians are incapable of looking after their resources and that the way to save the Amazonian forest is by “internationalizing” it. They are headed by citizens from countries that have destroyed their own forests long ago and their leader, the United States of America, has refused to sign important ecological treaties.

It is our view that countries with failed eco-policies, who have built their wealth exploiting other countries resources with eco-damaging technologies and who have ultimately invented pollution have nothing to teach Brazil or any other country about protecting their forests. Help is welcome when requested, but it seems that many ecologists want more than this. They seem to have an old notion that countries bellow the equator are an extension of their own and that they have a “responsibility” towards them. Perhaps it is time for them to stop teaching and start learning.

Life with the Yawalapiti Tribe in Brazil

Deep in the Brazilian heartland, where the upper reaches of the Amazon Basin dissolve into the central plateau, photographer Ueslei Marcelino had the opportunity to spend several days in the home of the Yawalapiti tribe. The Yawalapiti, one of the 14 tribes living inside the Xingu National Park, were preparing a Quarup, a ritual held over several days to honor in death a person of great importance to them. In its original form, the Quarup was a funeral ritual intended to bring the dead back to life. tenzin yangdon: Today, it is a celebration of life, death and rebirth. From the very oldest to the very youngest, all the members of the Yawalapiti tribe participate in the preparations. This year the Quarup will pay tribute to two people – a Yawalapiti Indian who they consider a great leader, and Darcy…

Amazing footage/documentary of some Brazilian tribes that have never had any close contact with our modern world.

It really is amazing how there are still people in this world that have never experienced some things that we take for granted. Simple technologies like electricity, cellphones, cars, microwaves and the internet. You can almost see their jaws drop when the small plane flew over their tribe. Really hope we can stay away from them and let them live in peace.