Archive for the tag “Minas Gerais” 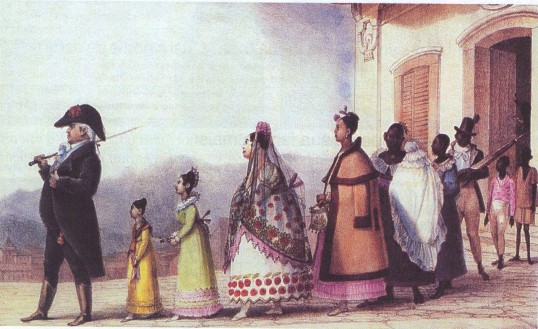 About two centuries later, after populating the Northeastern coast of Brazil with profitable sugar plantations, the white colonizers finally found the gold that they had always believed to exist. Rather than being hidden away in the mythical El Dorado, it was lying on riverbeds beneath crystalline waters, far beyond the coastal mountain range. A flood of adventurers, some alone and others accompanied by militias and enslaved African descendants plunged into the region to claim the nuggets that the natives had simply perceived as being beautiful offerings of Mother Nature. The prospectors were afraid of Indians, wild beasts, bandits and runaway slaves, but nevertheless they dipped their rusty metal equipment into the water. The riches that they found there and carried back to the coast, made Brazil one of the world’s most prosperous colonial possessions.

Because its port was closer to the mines than Salvador, the then capital of Brazil, Rio de Janeiro began its ascension to become the country’s most important city. However, Rio only really started to develop its flamboyant personality in 1808, with the arrival of the Portuguese royal family. Accompanied by thousands of courtiers, the king had fled Lisbon on the very eve of the city being occupied Napoleon’s advancing army after they had already seized the rest of the Iberian peninsula. Just as with my dad, the Portuguese refugees crammed into any sailing vessels they could find to take them to safety, and crossed the ocean under the protection of the British navy. 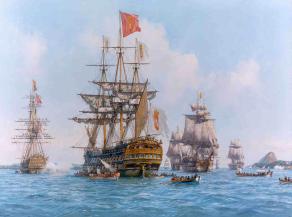 The arrival of House of Bragança marked the first time European royalty had set foot in the Americas. The experience of a European royal family ruling over a global empire from the New Continent was completely unique. With them came debauchery and abuse of power but the noble families also brought with them scholars who would open the first schools in Brazil, as well as artists, intellectuals and concepts of an evolved legal system and administration.

The royal court had one thing in common with Brazil’s indigenous people: whether by contract or by slavery, labour was taboo. The difference between the two, was that the Portuguese women also took it easy and the males had other people to go to war for them. It is not that there were no colonizers labouring on the land. During the course of the Portuguese colonization, there were numerous agricultural settlement schemes based on European immigrants, much like the experience of pioneer settlers in North America. But in general, the question of who was going to do the hard physical labour – especially in the mines, in the sugar plantations and later in the coffee plantations – worried the colonizers. Initially they tried to employ the indigenous inhabitants but these fled, died from the white men’s diseases or, in the ultimate act of resistance, committed suicide. The answer was to turn to Africa. In total, some four million enslaved Africans were transported across the South Atlantic to Brazil and they would become the third leg of the country’s genetic pool. Brazil would champion the world in slave imports and from the late nineteenth century, the African descended population would constitute the majority of the nation, and would transform Brazil into the largest black country outside the African Continent.

There was another question: as Portugal’s military had been completely defeated by the French invaders in Europe, how could they possibly defend Brazil’s long shoreline? Britain came to the rescue. The result would be that although Brazil was never to belong to the British Empire, the country was to be part of its zone of economic and political influence.

Anyway, because of the gold trade and the arrival of the royal court, Rio de Janeiro developed into Brazil’s prosperous and cosmopolitan capital where its small but influential merchant community shared power with the ruling nobles. In general, foreigners ended up doing intellectual tasks, such as engineering, medicine, commerce and industry. The authorities granted the British the major contracts to modernize the country– developing ports, railways, electricity systems and other key infrastructural elements – while immigrants from Portugal and from elsewhere fulfilled the role of a middle class. 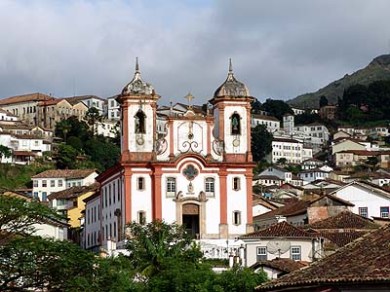 In 1982 at the end of my first semester my University (the U.F.R.J) organized a holiday trip to the historical town of Ouro Preto, in the state of Minas Gerais as part of their peer bonding policy. The town was about seven hours by car from Rio and had been constructed by the Portuguese in the 1700’s when the region was one of the world’s biggest suppliers of gold.

It  was listed as a heritage for humanity by UNESCO and still retained the elegant and prosperous colonial architecture, and had churches literally covered in gold. The streets were still of cobble stone and despite the cars and electric cables it must not have been much different to what it was 400 years ago at the time of its splendor. In the early 1908’s the mines had dried up long ago and it had become a university town which translated into a lot of young people having fun away from home in student hostels which they called republics.

Not only the town was very special but the surrounding too. The more temperate climate accounted for beautiful and pleasant forests, the now gold-less soil main element was the “pedra-sabao”, or soap stone, which the rain and rivers had sculpted into creating strange caves with natural pools and waterfalls. These natural showers were about a half an hour’s on foot from our republic and were perfect to sober up the hangovers and just the walk itself through the countryside was worthwhile.

Besides the magical settings and the numbers of young people, there was another other cool aspects of Ouro Preto; the free student’s refectory was the best one I had ever been to.

The winter weather wasn’t always great and the students would stay indoors getting bored and drunk. As soon as they found out that there was a guitar player/singer around they started to organize parties where my un-amplified nylon string guitar and my voice on top of the dining table was the music box. The success was so big that people from other “republics” started showing up. I was enjoying myself so much that I decided to stay on for another two weeks after my class mates left.

Six months after joys of that holiday the good life would be overshadowed by the harsh realities of hyper-inflation, recession, joblessness and other illnesses brought by bad economic administration.

If there is a person who embodies the recent Brazilian history from the perspective of Rio de Janeiro’s middle class, this person is Fernando Gabeira. Reporter, political activist, terrorist, exiled, behavior guru, politician, Senator and currently political commentator.

His career began in Juiz de Fora a town between the states of Minas Gerais and Rio de Janeiro in the early sixties when the political turmoil generated by the military coup and the student demonstrations brought him to Rio de Janeiro. When the repression  intensified he and many of his friends went underground, trained as guerrillas and produced spectacular actions against the government.

Gabeira was part of the most dramatic one: the kidnapping of the American Ambassador Charles Elbrick. They hid with him in a house in Santa Tereza and ended up exchanging him for the freedom of companions and for the publishing texts in opposition to the regime in the media. The success of the operation meant that the secret police hunted him down with extra zeal; he exchanged fire with them when he was arrested, and was tortured while wounded.

He was in a group that the military swapped for the Swiss embassador during the 1970’s world cup. After passing through Chile he ended up in living France and in the early 80’s he received amnesty together with most political exiles. He then returned to Rio de Janeiro to begin his career as Brazil’s rock and roll politician.

As most ex-terrorists, outside Brazil he broke away from the organization he belonged to, the MR8, and embraced alternative politics. He published his memoirs in the best seller O Que e Isto Companheiro? Where he described his life as a guerrilheiro, and his “path to good sense” when he broke away from hard-core revolutionary Leninism. As the dictatorship faded away, in the early days of the “abertura poltica“, Brazil’s glasnost, everyone read his book where the points he lifted of doing a more personal and heart oriented revolution were embraced almost universally in the “inteligentzia” of Ipanema.

One detail of his book caused a big commotion in every quarter, he declared that he was bisexual at the time he had been a terrorist.

In Rio, The place he frequented the beach, the Posto Nove in Ipanema, became the hub of what Brazil was going to be in 20 or 30 years, a space of plurality and open-mindedness. Gabeira made it famous by appearing there in a crochet thong, the photos hit the media and caused a national stir; the gay pot-smoking terrorist, politically active with a liberation and green agenda.

His next step was mainstream politics, he was one of the founders of the Brazilian Green Party and run for several important posts, even President. As a politician he lifted controversial issues such as the legalization of marijuana, gay marriage and the regimentation of prostitution and is close to Marina Silva Brazil’s ecological champion.

Despite his alternative profile he is very popular and has been very close to be elected the Governor of Rio de Janeiro and its mayor in recent years and received the highest amount of votes a federal deputy has ever had in Rio, close to 900.000 votes.

Read more about him and this period in Brazil in Lost Samba.

The Club of the Corner (Clube da Esquina)

All of these guys were a constant presence on Brazilian record players in the seventies as song writers, as musicians, and as singers and formed this influential club from Belo Horizonte, Minas Gerais state.

Their music had a thread of simplicity, beauty and experimentation tying them together. They were anti-stars and were very quiet and down to earth in their private lives, the kind of guys you’d like to be friends with.

Milton Nascimento (the black guy with a cap picture right) tied the “club” together with his unique voice that became world famous and admired by artist from Bjork to Paul Simon.

They had a strong Beatles influence as well as Bossa Nova and anything else they heard.